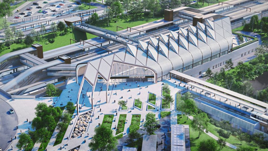 The construction of HS2 Ltd’s new £370 million Interchange station, near Solihull in the West Midlands, will create up to 1,000 jobs over at least the next five years.

Newly appointed contractor Laing O’Rourke confirmed the news on September 6, when major figures from construction and politics visited the site of the project, which is still in its very early stages.

The main contractor will start work next year on the detailed design work for the extensively revised station building. The 400-acre site - within a triangle of land formed by the M42, A45 and A452 roads - is currently being prepared by Balfour Beatty VINCI ready for construction to begin in 2024.

Laing O’Rourke then has three years to complete the station, in advance of the railway opening between 2029-33.

Up to five trains per hour are planned to pass through the interchange station in both directions, with an estimated total of 175,000 seats per day,