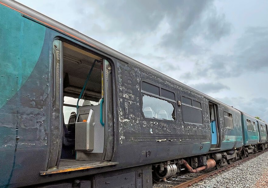 A reduced service across the Valleys network, including no trains on the City Line in late May, was the immediate outcome of the damage to a pair of Class 150/2 ‘Sprinter’ two-car diesel multiple units.

But with rail tickets accepted on Cardiff Bus services, and replacement buses for students to and from Bishop of Llandaff Church in Wales High School, TfW admits that its services will continue to be affected, although no further details are yet available.

The 2043 Crewe-Cardiff Central, formed of 150208/242/279, came to a stand shortly after Craven Arms station on May 22, with the first two units having caught fire after hitting a stolen mini digger that had been abandoned on the railway (RAIL 958). A criminal investigation is under way.

‘Sprinters’ are the only trains used on many routes across the network, including the Core Valley Lines to Treherbert, Aberdare and Merthyr Tydfil.