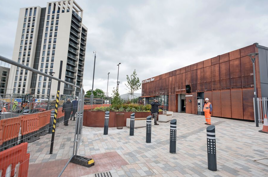 New facilities at the station, which will serve visitors to Alexander Stadium for this summer’s Commonwealth Games in Birmingham, include a ticket office, accessible toilet, and a new sports-themed frieze above the entrance.

West Midlands Mayor Andy Street said: “The Commonwealth Games, beyond being 11 exciting days of sporting spectacle, has the potential to deliver a lasting legacy for the people of the West Midlands for generations to come.

“The new station at Perry Barr is a great example of what that lasting legacy for our region actually means. It is a vast improvement on the old station - better lit, more spacious, and equipped with much better facilities including lifts to the platform.”