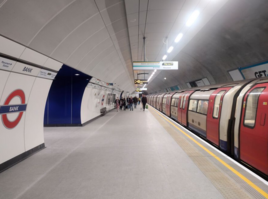 It followed a 17-week closure of the route between Moorgate and Kennington, as part of the Bank Station Capacity Upgrade project to increase capacity at the station by 40%.

During his visit, Khan alighted at a new five-metre-wide southbound Northern Line platform that has been constructed at Bank and connected to the Tube network via 1.5km of new railway tunnel. He also used the spacious passenger concourse that now occupies the former running tunnel.

Wayfinding has also been improved, by the installation of new signage and contrasting colours for the cladding between interchange corridors and platforms.

The next phase of work at Bank will now focus on providing step-free access to the Northern Line, a new station entrance on Cannon Street, and new and more direct interchanges between the Docklands Light Railway, Northern and Central Lines.

These connections will include two new moving walkways and 12 new escalators and lifts.