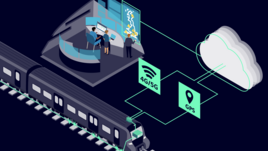 Siemens’ TBCM identifies sections of track that need attention by analysing data collected from  trains equipped with a GSM-R cab radio. The application can be downloaded, with no need for new hardware.

The company says that in addition to rough-ride detection and prediction, TBCM can be used to identify and monitor voids in the track, and to detect potential major anomalies. It also shows the effectiveness of repair at sites where rough rides have previously been reported.