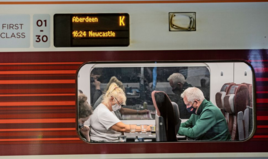 LNER has announced a return to its full pre-COVID timetable from February 14. A full catering offer has also returned, including cooked breakfasts and other hot meals.

Advance tickets are now on sale through to May 13, while the operator says it is also enhancing its LNER Perks rewards scheme for regular passengers.

LNER MD David Horne said: “We’re delighted that we will be increasing our timetable from February 14, connecting even more customers across our route just in time for the half-term school holidays in parts of the country and Valentine’s Day.

“Like many in the transport sector, we have been affected by staff absence due to COVID, and had to make some changes to our services to minimise inconvenience for our customers. We are now seeing fewer staff absences and expect that to continue.”

Fellow East Coast operator Hull Trains has also announced the return of some of its previously withdrawn services.

South Western Railway has reintroduced a small number of additional services to its emergency Omicron timetable, having previously said it was running 72% of its pre-COVID schedule.

■ Southeastern restored its full December timetable on January 31, following an improvement in staff ability. It had been running a reduced timetable since January 10.