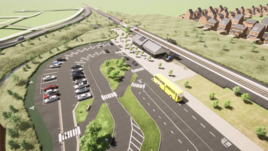 Construction work on the £80 million, three-platform station will start immediately in the new year with a target opening date of spring 2023.

Serving one of Europe’s largest business parks, the eastern extension of the existing network will be the first on Merseyrail to employ battery power instead of third rail.

Liverpool City Region Combined Authority is the lead developer of a consortium that includes Network Rail and train operators Merseyrail and Northern. The money is coming from the government’s Transforming Cities Fund.

Knowsley Council, which approved the proposals, has long been pressing for an extension of services beyond the current boundary of the present Kirkby station. A further extension to Skelmersdale is also within its sights.

Headbolt Lane, which will also receive services from Wigan and Manchester, will also feature a bus interchange, and around 300 park-and-ride spaces.