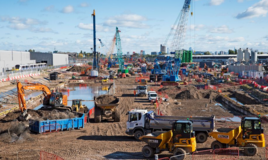 The first stage is the main station ‘box’ - the 900-yard-long reinforced concrete frame that will be part underground, and which requires the removal of almost a million cubic yards of clay.

Expanded (part of Laing O’Rourke) has been appointed by HS2’s station construction partner Balfour Beatty, VINCI SYSTRA joint venture (BBVS) to provide the structure, which will form the base for the main building.

It follows several months of site preparation for the 14-platform station (six of them high speed, all underground), with its split-level concourse and vaulted roof.

The main construction of the station box began on October 27. The ground floor slab will be built first, enabling large excavators to remove the earth from underneath.

Expanded will excavate 20 yards below ground level before erecting 32,000 tonnes of steel and pouring in 250,000 cubic yards of concrete.

Construction of this box at the eastern end of the site will allow the Tunnel Boring Machines (TBMs) to start on their journey towards Euston. The western end of the site is where the spray concrete-lined tunnel between Old Oak Common and the Victoria Road crossover box ends.

It was later populated by diesel-hydraulics and Blue Pullmans, and most recently by High Speed Train sets and Heathrow Express units. HS2 LTD.