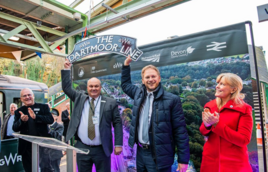 The first passenger service ran on the newly reopened Dartmoor Line between Okehampton and Exeter on November 17, three days ahead of its official reinstatement to the national network.

The commencement of a two-hourly service pattern by Great Western Railway on November 20 marks the return of regular services to Okehampton for the first time since their withdrawal in 1972.

The line was subsequently retained as a freight route to serve Meldon Quarry and since 1997 has been open to passenger services only on some summer Sundays.

The full reinstatement cost some £40 million and is the first reopening scheme to be completed under the Government’s Restoring Your Railway programme.

Network Rail has been praised for completing the necessary infrastructure works - including the laying of 11 miles of new track and installing 24,000 concrete sleepers - in just nine months and £10m under budget. This has been credited to the application of Rail Project SPEED approaches.