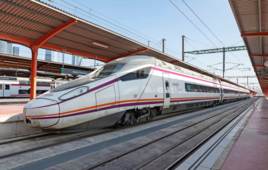 Renfe claims to have already studied the market on a route which served some nine million people per year prior to the Coronavirus pandemic.

Of that market, seven million passengers were carried by Eurostar, which links the French and British capitals with journey times of two hours and 15 minutes via the Channel Tunnel and HS1.

A Renfe spokesman said: “Renfe wants to operate on the Paris-London high-speed line through the Channel Tunnel and has already started initial contacts to compete with Eurostar.

“At the moment, there are available paths and capacity to operate the high-speed line. This high-speed route was of high traffic and was growing until COVID-19, a trend that is expected to recover next year. According to the demand analysis carried out, it would be viable and profitable for Renfe to compete with Eurostar.”

Renfe has not provided a target date for commencing services, but it confirmed to RAIL that it hopes to operate at least seven of its own trains, which would first require approval for use through the Channel Tunnel.