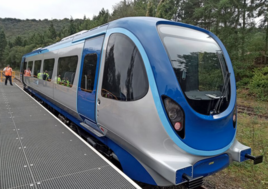 The Revolution Very Light Rail (VLR) demonstration vehicle has been officially launched, to provide a low-cost solution for the reopening of branch lines closed under the Beeching cuts.

Journalists were given their first opportunity to ride the self-powered and low-emissions single-car train on October 7, at a purpose-built test facility in Ironbridge.

The lightweight vehicle has been developed by the Revolution VLR consortium, led by Transport Design International (TDI) and which includes Eversholt Rail.

Established in 2014, the consortium has been backed by more by more than £4 million worth of development funding from the Rail Safety and Standards Board (RSSB) and the Department for Transport.

Weighing in at just 24.8 tonnes and with seating for up to 56 passengers, the demonstrator vehicle has a mass that is an estimated 40% lower than a single-car self-powered heavy rail vehicle of a similar capacity, such as a Class 153.

Light rail ‘vital’ but stable policies would give ‘greater confidence’

Light rail “plays a vital role” in supporting the shift from cars to public transport, and the case for it is “stronger than ever”, according to a new report.

Tram-train operation to continue in Sheffield as new systems proposed