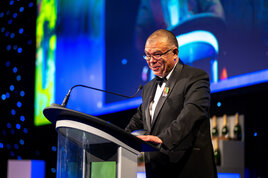 RAIL’s National Rail Awards returned to the Grosvenor House Hotel in London’s Park Lane on September 16, with an audience of more than 900 people.

After the paucity of in-person events over the past 18 months, it was the first opportunity for many in the railway to meet each other again.

Special guest Deputy Chief Medical Officer Jonathan Van-Tam, who is also a lover of railways, gave a speech which began with the words “I like trains”, prompting a huge round of applause from the audience.

He received two standing ovations during the evening, and remained on-stage throughout the ceremony to present the trophies alongside regular NRA hosts - RAIL Managing Editor and Events Director Nigel Harris and BBC Presenter Huw Edwards.

One of the most memorable moments of the evening was the presentation of a very rare Lifetime Achievement Award (only the second to be presented in 22 years of the NRA) to Adrian Shooter, chairman of Vivarail and career railwayman of more than 50 years.

Prior to the presentation of the award, MTR UK Chief Executive Steve Murphy and SLC Operations Managing Director Cath Bellamy both spoke to the audience about their memories of Shooter and his recruitment of them both.

In an NRA first, Shooter then made a short acceptance speech in which he made a heartfelt plea to the industry to do a better job of delighting its customers, both freight and passenger (you can read his full speech in the panel below right).

There was another NRA first in the form of the presentation of a posthumous award for Dr Illeana St Claire, former Chief Medical Officer for Govia Thameslink Railway, who died from cancer in September 2020.