The team charged with establishing the new Great British Railways is submitting advice to Government before the summer recess, as it works out a new structure for the industry.

Rufus Boyd, programme director for passenger and freight services, said: “We need to address the customer focus of the industry… fundamentally. The state will need to harness the private sector. We don’t have to wait for legislation - lots of what we are doing can be dealt with now.

“We need a new culture with the private sector and a genuine commercial approach.”

Boyd’s comments were made during a RAIL webinar entitled The Williams-Shapps Plan for Rail - Unleashing private sector potential.

More than 1,100 people registered to attend the event, chaired by RAIL Managing Editor Nigel Harris. Further webinars to develop the conversation are lined up through the rest of the year. Keith Williams, architect of the Williams-Shapps Plan, had been due to speak but withdrew due to family commitments.

The common theme among both the speakers and the audience was an urgent need to end prolonged uncertainty, with the Williams-Shapps Plan having been promised before the pandemic struck. When finally published this spring, it was described as ‘high level’ and ‘short on detail’.

Harriet Hepburn, Network Rail’s finance and business development director, said the railway could not rely on government to fund everything it does.

“We can’t sit around waiting for legislation, we have to get on with things. We need to make it easy to bring in private sector innovation,” she told the webinar.

“GBR will solve some things. But it will not in itself be a substitute for wholesale fares reform - not just from a financial perspective, but from a customer experience perspective in a world of radically changing travel patterns.”

Chris McClure, from rolling stock leasing company Porterbrook, said: “We’ve had a period of uncertainty. We now need to get on with it. We suffered from a race to the bottom in terms of prices. Once we have stability it will encourage more investment. If we are to invest in an asset with a 35-year lifespan, we need clarity.”

Paul McLaughlin, a director at RSSB (formerly the Rail Safety & Standards Board), said: “We are waiting for certainty. Stability is used by investors to decide what they want to do with their money. ‘Think national, but act local’ could be a strapline across the system. We need to get the best from devolved decisions, but we are part of a bigger system.”

Boyd concluded: “In the autumn we expect to see white smoke from Whitehall, and hope for a positive response which will allow us to stand up a more substantive entity in 2022.” 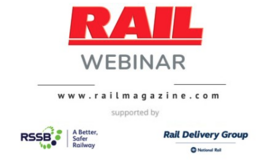 The first designs have been released of the longest of three ‘green tunnels’ that will be built for HS2 across Buckinghamshire and Northamptonshire.