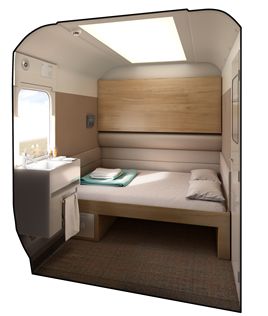 The carriages are being built by Construcciones y Auxiliar de Ferrocarriles (CAF) in Beasain, Spain. They will enter traffic in 2018, replacing the existing Mk 2 and Mk 3 fleets.

Scottish Transport Minister Humza Yousaf MSP visited the mock-up, and said: “When investing upwards of £60 million, we wanted a new Sleeper service that incorporated cutting-edge design, top-class passenger catering and a service that was emblematic of the very best Scotland has to offer. We also wanted a service that would enhance travel options to and from London as well as encourage more tourists to visit Scotland.”

Describing the Mk 5s as “breathtaking”, he said they offered a “glimpse of what innovative and never-before-seen upgrades to services rail passengers can expect”.

The new carriages feature double-room accommodation, a first for the UK. The new fleet will also have en-suite toilets and showers in a number of rooms in the accommodation carriages.

“Sitting with Humza Yousaf aboard the new Lounge Car allowed us to fast forward to 2018 and get a real feel for what will be a new standard of overnight travel between Scotland and London,” said Caledonian Sleeper Managing Director Peter Strachan.