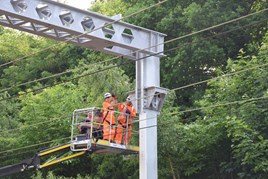 Network Rail expects fewer heat-related delays to trains on the Great Eastern Main Line this summer, after the installation of 13 miles of new overhead wires between Chelmsford and London Liverpool Street.

This is in addition to 54 miles of new wires being installed since 2014 as part of a £250 million NR project.

The infrastructure company said that because temperatures on the railway can be up to 20 degrees hotter than the air temperature away from the track, the older wires (which date from the GEML’s original 1950s electrification) sag and temporary speed restrictions have to be introduced. Already this has ceased between Chelmsford and Shenfield.

A further 20 miles will be replaced between Shenfield and London before the end of the year, including a large section at Gidea Park. The entire renewal project will be completed in 2019.