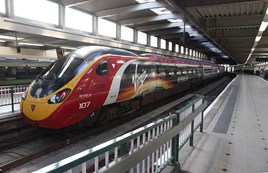 Virgin Trains (VT) has launched a new on board video-on-demand service.

Developed in partnership with GoMedia and Nomad Digital, passengers can access BEAM by downloading a free app onto a smart phone or tablet.

More than 200 hours of films, TV programmes and games can then be streamed via VT’s own WiFi, in what is believed to be the first time this technology has been used by a train operator.

VT celebrated the launch of the app with an event at London Euston on June 6, featuring actors from new film Independence Day: Resurgence including Jeff Goldblum and Liam Hemsworth.

BEAM is already available on Pendolinos on VT’s West Coast routes and will be installed in its Voyagers by September. East Coast services will then follow.

VT Co-Chairman Patrick McCall said: “The new BEAM app will make our passengers’ journeys fly by, feeling like they’ve arrived at their destinations before they know it. We’ve worked really hard to provide a fantastic range of entertainment to cater for all of our customers’ tastes. At VT we pride ourselves on continuously improving our customers’ on-board experience so we will continue to update the content on BEAM to guarantee our passengers have the latest entertainment on offer.”