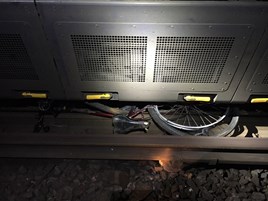 Trains hit a pushchair and bicycle that had been thrown onto the railway at Gravesend on June 5.

The first incident involved an empty pushchair at 2143, when the 2020 Ramsgate-St Pancras International hit it. The train was able to continue its journey at 2300 after the pushchair was removed.

The second incident involved the 2129 Faversham-St Pancras International, which was already heavily delayed from the earlier incident. It hit a bicycle in the same location. This became jammed under the train and also had to be removed. Trains began running at 0042 on June 6, and the train arrived in the capital 157 minutes late.

“Both incidents could have been much more serious, and it’s sheer luck that nobody was hurt,” said Network Rail South East Route Crime Manager Alice Morton. “I would appeal to anyone who thinks this sort of stunt is funny to think again.”

A Southeastern spokesman said: “It is clearly unacceptable and potentially dangerous to throw items onto a railway track and we can’t stress enough how this causes unnecessary delay to our passengers. We urge anyone who has information about either incident to contact the British Transport Police.”

The British Transport Police is investigating and anyone with any information should contact them by sending a text to 61016 or calling 0800 40 50 40 quoting reference 459 05/06/2016. Alternatively, information can be passed anonymously to independent charity Crimestoppers on 0800 555 111.