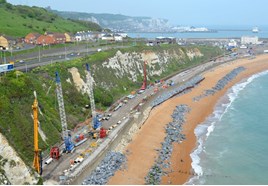 Engineers are on course to re-open the storm-damaged line between Dover and Folkestone by their December deadline, according to Network Rail.

The line has been closed since December 24 2015, when the sea wall at Shakespeare Beach was cracked and earth beneath the raised alignment scoured out by intense winter storms (RAIL 795).

Up to 100 engineers are on site to rebuild the railway, and piling is well under way to provide the columns that will support a new viaduct, replacing the damaged section of sea wall.

An NR spokesman told RAIL: “On May 30 we reached another milestone with the completion of piling for slab 1. There are four slabs that will make up the new viaduct deck. The piles in slab 1 have been exposed, cropped and are being prepared for commencement of reinforced concrete slab.

“At the western end of the site, excavation and formwork has been completed for the foundations of a sea spray wall, which will help protect the track from the sea.”

Five barges continue to deliver rock armour directly to the beach from Norway, to protect the sea wall from any further damage.