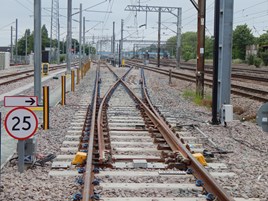 Network Rail completed £30 million worth of work over the May 28-30 weekend, in one of its least disruptive Bank Holiday engineering schedules.

As this issue of RAIL went to press, NR had not reported any problems or overruns to a tranche of projects that involved 11,000 engineers.

Among its largest schemes was providing enhanced rail connections between Hornsey depot in north London and the East Coast Main Line, ready for 115 new Class 700s being introduced by Great Northern over the next three years on the expanded Thameslink network. From 2018, new routes will begin from Cambridge and Peterborough through central London to Croydon, Gatwick and Brighton.

The work included signalling alterations and modifications to overhead wiring - resulting in a significantly reduced service operating over the three-day period from King’s Cross to Cambridge and Peterborough, while some suburban services were replaced with buses.

There were some timetable changes to longer-distance services run by Virgin Trains East Coast, Grand Central and First Hull Trains, although additional services and longer trains were laid on for Hull City supporters making their way to the club’s Championship play-off final at Wembley on May 28.

Also in London, new track was laid at Bermondsey, and signalling was replaced at London Bridge to facilitate an increased frequency from December 2018 of up to 24 Thameslink trains per hour between London Bridge and St Pancras.

Elsewhere, journey times for some Virgin Trains and CrossCountry services running between Stafford and Crewe were increased by 25 minutes, to enable the finishing touches to be applied to Norton Bridge flyover - including the retrieval of track and equipment made redundant by the new formation (RAIL 799).

Another batch of preparatory work for Crossrail was completed at 19 locations in London, Berkshire and Essex, including platform extensions between Liverpool Street and Shenfield and the erection of masts for electrification between Paddington and Maidenhead.

Finally, TransPennine Express services between Newcastle and Liverpool terminated at Manchester Victoria, enabling work to continue on the Ordsall Chord that will link Manchester Piccadilly and Victoria stations.