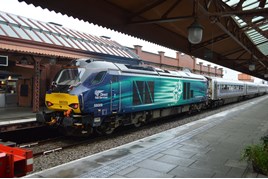 TransPennine Express (TPE) ordered 125 new vehicles on May 23, including 12 five-car electric multiple units (EMU) and 13 sets of five-car carriages built by CAF. Eversholt Rail Group will fund the EMUs, while Beacon Rail finances the locomotive-hauled coaching stock. Class 68s leased from Direct Rail Services will haul the LHCS. TPE says no UK manufacturer took part in the competitive tender process and that most of the ‘68s’ to be used are already in the UK. TPE is the third Train Operating Company to lease the locomotives, following Chiltern Railways (CR) and ScotRail (SR). CR leases six, and SR two.

TPE will use the Civity trains between Manchester/Liverpool to Glasgow/Edinburgh. The ‘68s’ will operate between Liverpool and Newcastle. The new fleets follow on from the AT300 deal announced in April, which will see Hitachi Rail Europe build 19 five-car bi-mode trains for use on trains to Edinburgh via the East Coast Main Line.