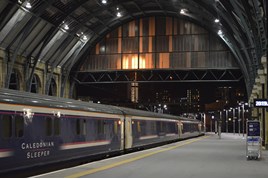 London King’s Cross is being viewed as a possible future station for the Caledonian Sleeper.

The operator’s Managing Director Peter Strachan told RAIL that feedback from passengers during the diversions caused by the closure of the West Coast Main Line at Lamington (RAIL 793) was that the station had better Tube connections than London Euston and that the facilities were good.

CS needs to consider a new terminus while Euston is closed for remodelling as part of HS2, and while it had looked at St Pancras International in the past, King’s Cross is viewed by Strachan as a more likely candidate, even though there are issues with the length of the platforms.