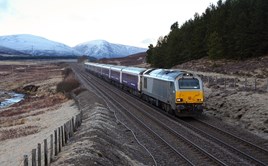 Oban and Scotland’s Far North could be served by Caledonian Sleeper trains, but funding from authorities would be needed to support the services.

CS Managing Director Peter Strachan, speaking exclusively to RAIL on May 6, confirmed that discussions had taken place with user groups regarding running trains north of Inverness, and with business groups for Oban.

If the latter happens, he has not ruled out the possibility that extra Mk 5 coaches may have to be ordered from Construcciones Y Auxiliar De Ferrocarriles (CAF). The Spanish company is already building 75 vehicles for CS that will enter traffic in 2018.

Strachan said of the Far North: “It is a journey of six or seven hours to the Central Belt. If Hitrans wants to invest in a feasibility study, I have said we will help and support that with analysis. It is a long way to committing, but we are prepared to look at it.”

He added, however: “I have said I do not see this as a standalone business case. I think it will need subsidy from local authority or Transport Scotland.”

Regarding operations, Strachan said that the level of detail had not been looked at, but that he didn’t want to “tie up locomotives and stock that would otherwise be undergoing maintenance”.