Landslip could close section of S&C until late 2017 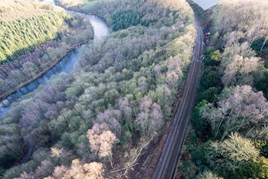 Speculation is mounting that the Settle-Carlisle Line will remain partially shut into the latter half of 2017 and possibly even later, due to the scale of the engineering task required to repair a landslip at Eden Brows (eight miles south of Carlisle).

Rail services from Leeds have run only as far as Appleby since February 9 (RAIL 795), when Network Rail shut the route as a safety precaution following the movement of 500,000 tonnes of earth in an embankment above the River Eden.

Replacement bus services have been taking passengers onwards for the remaining 30 miles by road to Carlisle, while NR and Story Contracting continue to monitor the landslip that has so far shifted 1.5 metres, and to devise a permanent solution that is expected to cost tens of millions of pounds.

The Up line at Eden Brows has been removed, and the Down line left in place but usable only to light road-rail vehicles. An access road has been constructed to the remote hillside across neighbouring fields, with a temporary roadway laid for heavy plant. A compound has also been built to house equipment and contractors for the task ahead.

The Friends of Settle-Carlisle Line (FoSCL) group is anticipating a lengthy closure of 18 months or longer.

But in response to media reports, Network Rail issued a statement on May 16, saying: “While we acknowledge the engineering job required at Eden Brows is huge, we have said all along that the spring of 2017 is a reasonable estimate for the re-opening.