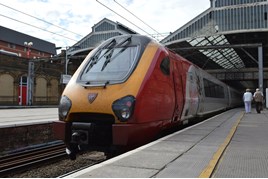 The figures show punctuality of overall services for both East Coast and West Coast franchises, as well as by specific route. Information is updated every four weeks.

According to Virgin Trains, the data shows that its services are 3.5 times more likely to arrive early than ten minutes late, that only 2% of Virgin Trains services are cancelled, and that almost three-quarters of services arrived within four minutes of their planned arrival time.