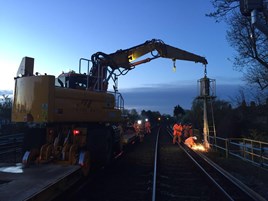 More than 11,000 Network Rail engineers worked over the May Bank Holiday weekend (April 30-May 2), completing £33 million worth of improvements with no reported overruns.

One of the largest single projects was the transfer of signalling in Sheffield and South Yorkshire from Sheffield Power Signal Box to York Rail Operating Centre (ROC).

This caused East Midlands Trains services from London to Sheffield, Leeds and York to terminate at Derby, while EMT’s Nottingham-Liverpool services were replaced by buses between Chesterfield, Stockport and Sheffield. TransPennine Express services from Cleethorpes to Manchester Airport ran as far as Doncaster, with buses then running to Manchester Airport. Some Northern and CrossCountry services were also affected.

In the North West, track renewal at the junction of the West Coast Main Line and the Windermere line, plus ongoing electrification work on the latter, disrupted Virgin Trains and TPE services to Glasgow and Edinburgh, and caused the diversion of the Caledonian Sleeper to the East Coast Main Line.

Elsewhere on the WCML, the finishing touches were made to the new flyover at Norton Bridge that opened at Easter (RAIL 799). Track, overhead wires and point work made redundant by the new junction layout was recovered.

In the South East, nearly 1,000 metres of track on the Great Eastern Main Line was replaced between Harold Wood and Brentwood, while structures were built to carry new overhead wires at Seven Kings, in East London. Work also took place at Harold Wood and Gidea Park stations to prepare for the arrival in 2017 of Crossrail, resulting in alterations to Abellio Greater Anglia services.

In south London, resignalling on the Brighton Main Line between Balham and Streatham was completed by replacing more than 50 1970s-era signals and moving control from Victoria to Three Bridges ROC. Gatwick Express trains ran to London Bridge instead of Victoria on May 1.

To the west of the capital, London Paddington experienced a reduced service due to the installation of overhead wires and piling for masts throughout the Thames Valley. Crossrail construction work also took place at Southall and Hayes & Harlington stations, while a new set of points was installed on the approach to Paddington. Finally a new bridge was constructed in Royal Wootton Bassett.

“I would like to thank passengers for their understanding while we worked to improve the railway over the long weekend, part of the £40 billion we are spending to keep passengers and freight moving,” said NR Chief Executive Mark Carne.

“I am proud of the efforts of our engineers who worked tirelessly to deliver another slice of our Railway Upgrade Plan aimed at providing better, more reliable journeys for passengers and businesses across Britain.