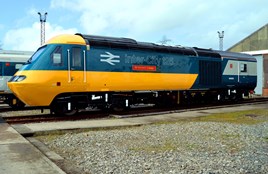 The 40th anniversary of the High Speed Train was celebrated at an open day at St Philips Marsh depot on May 2.

Great Western Railway organised the event, the highlight of which was the unveiling of the first production HST Class 43 power car (43002) in the original Inter-City 125 blue and yellow livery applied to the ‘43s’ when they were delivered.

The power car was named Sir Kenneth Grange, in honour of the designer of the exterior styling of the power car nose cone, interior layout of the HST and the train’s aerodynamics.

The trains entered traffic on the Western Region in August 1976, and were passed for 125mph running in October that year. They were introduced onto the East Coast Main Line in 1978, cross-country routes in 1980, and the Midland Main Line in 1982.

Today they are operated by CrossCountry, East Midlands Trains, Grand Central and Virgin Trains East Coast, as well as by GWR. Network Rail also uses three ‘43s’ for its Network Measurement Train. All but CrossCountry sent a power car to the event.