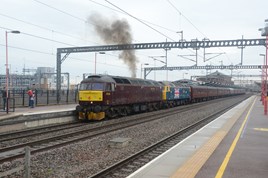 In your letter issued with the Prohibition Notice, you said the governance changes required should include an autonomous chief executive, a safety executive, an engineering executive, and for the chairman to take a step back. Have all of these things happened?

“One of the key things for us to lift the prohibition was for the board to put in place a health and safety sub-committee of the board that has real railway experience. They’ve done that.

“We’ve met the person they’ve appointed to head that board and he is a very experienced rail professional. The chairman will not be on the sub-committee, but their new non-executive director will play a very important part of it.

“Their new head of safety has been in place since November. He’s having an impact on the company and some of the things he’s put in place are already showing an improvement. He will sit on the sub-committee. We feel that’s a very important step forward.

“We’ve also met the head of engineering and believe he’s an extremely competent fellow. We looked at some of their engineering work and this is extremely good.”

What about the autonomous chief executive?

“The WCR board has given delegated authority to spend money on safety improvements independently of the board. And day-to-day running is very much the executive team’s responsibility, all of whom have all the competencies required.”

So they have achieved what was necessary from a governance point of view?

“Yes. Also, WCR has hired - and we have proof of this - a very reputable safety consultancy to assess the safety culture and to check how they are embedding this in their organisation. They will also establish if there are any competency gaps that need to be filled. That work is headed by an ex-HMRI inspector. One of the key things to lift the prohibition was that we have proof that they have engaged this company and that it was acceptable to us.

Five weeks is not long to have completed the quite radical changes you asked for. How has WCR managed to achieve this?

“WCR is quite a small organisation - they can move much faster than others. They realised that they had to make the changes and they co-operated with us very openly. They completely opened themselves and their files to us. They made all the relevant people available, and where they needed to arrange contracts they did it. It was a proactive approach.

“We made it very clear from the outset what they needed to do. A Prohibition Notice is about immediate risk, so you don’t want to keep it in place for a long period of time. We use Improvement Notices for longer-term improvements and they have one of those. They took it upon themselves to get on with the things that we wanted to see done.”

How are you continuing to monitor WCR?

“They’re still going to be subject to our close supervision. I have one inspector assigned to the company who will go to Carnforth frequently. And there are six of us who will make unannounced random inspections of operations. I include myself in those six. I will be going to Carnforth myself, because my name was on the Prohibition Notice, to satisfy myself that they are making sufficient progress. We will be inspecting unannounced because that’s the best way to find any issues.”