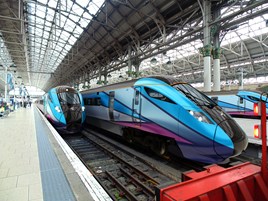 The majority will be assembled at Hitachi’s Newton Aycliffe facility and are capable of 140mph pending suitable signalling. Maintenance will be carried out by Hitachi at Craigentinny and Doncaster Carr, with overnight stabling and servicing at Edge Hill, Heaton and York.

The Hitachi trains will be from the AT300 family, as per the Class 802s for Great Western Railway. They are being financed by Angel Trains, which will lease them to FTPE. Each FTPE AT300 will have 161 more seats than the existing three-car Class 185s.

The are the first of two new fleets to be signed for by FTPE, with a further 25 trains still to be ordered. No details have been finalised for them, but FTPE expects the additional 25 new trains to be in traffic in 2018.

TransPennine Express Managing Director Designate Leo Goodwin said: “The signing of this contract is the first major step for the new franchise.

“These trains will be able to run at speeds of 125 miles per hour but they also have the capability of running at 140mph if the network allows for it in the future.”

Karen Boswell, Managing Director of Hitachi Rail Europe said: “Building on our contracts to deliver new IEP trains for the East Coast and Great Western Main Lines, commuter trains for Scotland, inter-city trains from London to Devon and Cornwall, as well as our existing High-Speed 1 Javelin services operating from London and Kent, Hitachi is on track to transform rail travel for millions of fare-paying customers throughout the UK.”

Angel Trains Chief Executive Malcolm Brown added: “Passengers will be able to travel seamlessly across the TransPennine network, regardless of whether the route is electrified.

“We have already invested over £3.8 billion in the UK rail industry and, working with our partners in the industry, we look forward to continuing to make further significant investments in rolling stock in future.”

FTPE will retain around half of its current Class 185 trains.