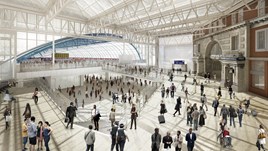 Investment topping £800 million will be spent over the next three years to improve travel to and from London Waterloo, Network Rail announced today (March 23). New trains and more station capacity will be introduced by 2019, increasing peak-time capacity by 30%.

Waterloo is Britain’s busiest station with 99 million users last year, and the number of passenger journeys on the South West route into the station has doubled in the past 20 years to 234 million per year. A further 40% growth is predicted by 2043.

Most improvements are being funded by the Department for Transport (DfT) as part of Network Rail’s £40 billion Railway Upgrade Plan. Also included in the upgrade are 150 Class 707 vehicles ordered in 2014.

Planned work includes rebuilding Waterloo International with Platforms 20-24 back in use. Platforms 1-4 will be extended to accommodate ten-car trains. This will take place during August 2017, with significant changes to the timetable needed. A new station concourse will be built near the former international platforms. Enhancements will also be carried out at Vauxhall and Surbiton.

Secretary of State for Transport Patrick McLoughlin said: “From 2017, passengers will benefit from a bigger and better London Waterloo station and 150 new carriages providing more space for passengers arriving at London Waterloo over the three-hour morning peak - this is in addition to the 108 extra carriages that have already been added since 2013.”

Network Rail Chairman Sir Peter Hendy said: “This is the biggest package of improvements for passengers travelling to and from Waterloo for decades. It will provide passengers with a better station, extra seats and new trains.

“And let’s face it, this is not before time. Since 1996, the numbers of passengers on routes into Waterloo have more than doubled. And this increase is showing no sign of slowing down.

Stagecoach Rail Managing Director Tim Shoveller added: “This is the biggest programme of improvements for decades and will boost capacity during the busiest times of the day by 2019. It will also create the extra space and upgraded infrastructure needed to increase capacity for our longer-distance main line services in the near future.”

@plyons45 Enjoy! Am sure the doggie will enjoy it too. Very therapeutic!

On site at @WensleydaleRail to see @507stre of the British Army wrapping up a fortnight of renewals, repairs and mu… https://t.co/nj1efU5QfR