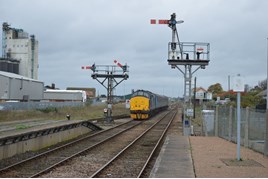 AGA’s ‘Short set’ of three Mk 2s will be strengthened with an extra Mk 2 for the train, which will raise funds for East Anglia’s Children’s Hospice (EACH).

Tickets are £60 with all profits donated to EACH, with bookings made at www.greenrailtravel.co.uk/special.