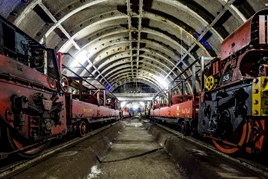 The project to open the 89-year-old Post Office Underground Railway reached a milestone yesterday (February 4) with a breaking ground ceremony to mark the start of construction at the Mount Pleasant site in Phoenix Place, near Farringdon.

Mail Rail was originally due to open in 2019 (RAIL 745) as the second phase to the overall Postal Museum project, phase one of which was expected to open this year. But now that the full £26 million required for the project has been raised, both parts can open together in 2017.

Broadcaster Dan Snow, who has supported the project since 2013, took a sledgehammer to a wall in the car depot to symbolically start construction. The wall was part of a manager’s office that was not part of the original structure.

Said Snow: “In my experience, this is the best thing to do to managers’ offices. It’s a great honour to take part in restoring Mail Rail to its original authentic condition ready for tourists to come down here, by smashing up this manager’s office.”

The plan is to create an immersive ride and interactive exhibition in the Mail Rail car depot and down into the tunnels themselves. Only around 0.6 miles (1km) of the total 6.5 miles of tunnels can be used for the ride because they were only designed for transporting letters, meaning there are no fire exits along the route.

Two battery-operated trains have been ordered to run on the 2ft-gauge railway. Built by Severn Lamb in Stratford-upon-Avon, each train will comprise three carriages. Because of the small gauge, each train will only carry about 15-16 passengers at a time, or 30-32 if half of those are children.

One train will be green (the colour of the original mail trains when the railway opened in 1927) and the other red (the colour they were when the railway closed in 2003). Concept designs are currently being finalised, and the first train is expected to be delivered in the summer.