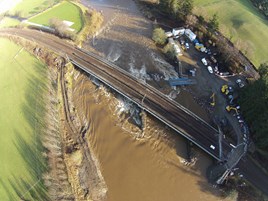 Lamington Viaduct was “in a total state of collapse” before being rescued from the waters of the River Clyde, reports the leader of the repair project.

Speaking exclusively to RAIL, Network Rail Route Delivery Director Stewart MacPherson revealed that “the bridge would no longer be here” had work to fix it not started promptly after defects were first reported on New Year’s Eve.

He added that engineers have now won the race against time to prevent the bridge’s complete collapse, despite the scale of damage proving far worse than initial assessments had indicated.

The problems at Lamington first surfaced on December 31 2015, when a passing train driver spotted a dip in the track above pier two (the piers are numbered one to three from the bridge’s southern end on the right-hand side). Track maintenance staff investigated, and all services were suspended once missing masonry was spotted just above the waterline.

“Storm Frank created a torrent of water, and flows were so large that water came up almost as high as the bridge deck,” said MacPherson.

“We immediately began placing rock armour around pier two, but at that stage we did not know the extent of the damage.”