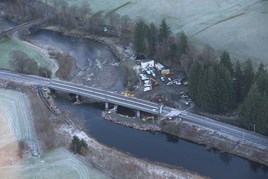 The ScotRail Alliance has confirmed that Lamington Viaduct will remain closed until the first week of March, leaving the West Coast Main Line between Carlisle and Glasgow severed.

Damage to the bridge’s stone foundations inflicted by Storm Frank at the turn of the year has been found to be far worse than first thought, forcing Network Rail to revise its initial plans to re-open the bridge by the start of February.

Engineers have successfully dammed part of the River Clyde to stabilise one of the bridge’s piers, by pumping 300 cubic metres of concrete into a void scoured out by high and fast-flowing water levels.

However, subsequent inspections have revealed damage to a second of the bridge’s piers and to steel bearings supporting the bridge deck.

Engineers will install concrete supports and anchors to strengthen the piers, while widening the river to reduce water pressure on the structure.  The bridge deck will need to be realigned and track relaid before services can be restored.

Diversionary services will continue running between Glasgow and Carlisle via Dumfries in addition to replacement bus services, adding an hour to journey times.

“The damage caused by Storm Frank to the Lamington Viaduct has been very serious,” said ScotRail Managing Director Phil Verster.

“Our engineers have been in a race against time to stabilise the structure and prevent it from collapsing into the Clyde. Only now we have won that race can we really see the full extent of the damage.

“I know that the damage that Storm Frank has caused to this viaduct is impacting on a lot of people. We are doing everything we can to get the repairs done and the line re-opened quickly and safely.”