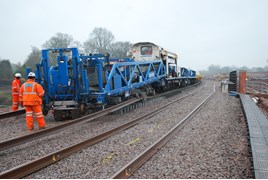 Workers constructing a flyover near Stafford have set a new track-laying record.

The previous 48-hour track-laying record of 3,932 metres was beaten over the weekend of December 12 and 13 by Staffordshire Alliance, which laid 4,017 metres of rails at Norton Bridge.

Designed to remove a major bottleneck on the West Coast Main Line, the new lines branch off the WCML at Little Bridgeford to the north of Stafford, with one line rejoining the WCML at Crewe and the other running over the WCML to rejoin the route to Stoke-on-Trent, eliminating the existing junction at Norton Bridge.

The £250 million project is due to be commissioned this Easter, and is being delivered by a partnership of Atkins, Laing O’Rourke, Network Rail and VolkerRail (known at the Staffordshire Alliance).

Work has involved the construction of 11 new bridges and six miles of new track. Four rivers have been diverted and more than one million tonnes of earth moved.

Staffordshire Alliance Manager Matt Clark said: “This is another milestone for the project that has been achieved on programme, with the whole Alliance team pulling together to deliver an exceptional amount of earthworks and track in a very short space of time.”