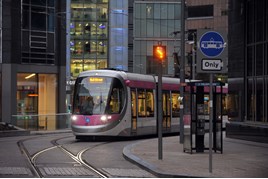 Trams are running on the streets of Birmingham as Midland Metro services began operating in the city centre yesterday (December 6).

Trams are serving a new stop in Bull Street, the first step in the opening of the £128 million city centre tram extension. This is the first time trams have run in the city since they were withdrawn in 1953.

Building of the Midland Metro extension is being carried out by Centro, the delivery arm of the West Midlands Integrated Transport Authority (ITA).

Councillor John McNicholas, chairman of the ITA’s Transport Delivery Committee which oversees Centro, said: “It’s good news for Birmingham but also the wider West Midlands as this extension is expected to create more than 1,300 sustainable new jobs and boost the regional economy by more than £50 million a year.”

Cllr McNicholas said the extension was just the start of a major expansion of the Metro over the next few years thanks to the regional devolution deal struck with the Government.

“We will see £1.2 billion invested in public transport over the next 10 years,” he said. “This will mean important new Metro links in Wolverhampton as well as Edgbaston and to Brierley Hill. Passengers will also be able to get straight to the High Speed 2 rail stations in Birmingham and the NEC/Airport by 2026. This is fantastic news for the region.”

Once complete the Metro extension will see trams from Wolverhampton continue into the city through Bull Street, Corporation Street and Stephenson Street to terminate at New Street station.

Work on the remainder of the city centre extension has been scaled back by Centro for the Christmas period and will resume in the New Year when a completion date will be scheduled. Work has already begun extending the route from New Street Station to Centenary Square with services expected to start running in 2019.

The service is operated by National Express West Midlands.