Hynes: North’s rail will overtake the South by 2020 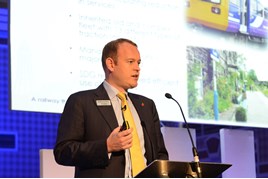 The North will have better rail quality than the South by January 1 2020, Northern Rail Managing Director Alex Hynes told delegates at the National Rail Conference on November 5.

The event, organised by RAIL and held in the Queens Hotel, Leeds, had an HS2-inspired theme. Hynes was also discussing changes planned for the next Northern franchise. The new franchisee was due to be announced shortly after this issue of RAIL went to press, with the new operator due to take over in February 2016. Currently operated by a 50/50 Abellio/Serco ownership, the franchise is being bid for by Abellio, Arriva and Govia.

Referring to the quality of trains and services in the North, Hynes asked NRC delegates: “How many people don’t take trains in the North because they think they’re going to get a Pacer?”

The first designs have been released of the longest of three ‘green tunnels’ that will be built for HS2 across Buckinghamshire and Northamptonshire.