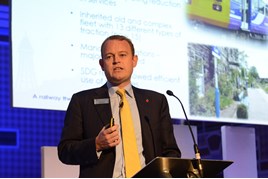 Northern Rail Managing Director Alex Hynes spelled out to National Rail Conference delegates in Leeds on November 5 what has been done with a franchise that was let in 2004 as a no-growth deal.

“We have doubled fleet reliability of the franchise in the last ten years,” he said. “The trains get more and more reliable, and despite the fact that we had this no-growth franchise, we’ve worked with others to increase it with a third more capacity.

“We’ve had 50% more growth, so our trains are busier than they were. We carry a quarter of a million customers a day, nearly up to 99 million per annum.

“So where are we now? We started our directly awarded franchise on April 1 last year - 22 months to take us to the start of the next Northern franchise and we could be waiting for the new owners to arrive, but we’re not.

DfT has “no idea what to do”, say top railway insiders