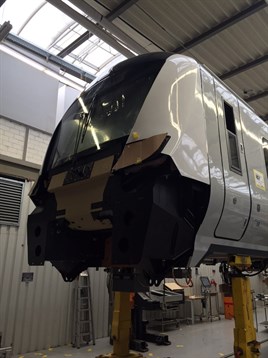 Six 12-car Class 700s are currently being tested at Siemens’ test facility in Wildenrath (Germany), along with one eight-car unit.

The seventh 12-car train is being prepared at Siemens’ factory in Krefeld for testing today (April 2). It will leave Krefeld for Wildenrath next week.

The first ‘700’ will arrive in the UK at Siemens’ Three Bridges depot in August, with the train due to be handed over to Govia Thameslink Railway in December. It is expected to enter traffic in February.

PHOTOGRAPH: The 13th Class 700 to be built (an eight-car version) is under construction in Siemens’ factory in Krefeld. RICHARD CLINNICK.