IPEMU tests to end this week 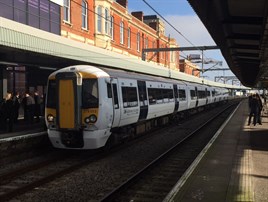 Battery-powered electric multiple units will feature in Network Rail’s electrification Route Utilisation Strategy, which will be released in March.

Testing of the modified Class 379 Electrostar on the Harwich-Manningtree branch finishes on February 13. Trials that have involved the four-car Electrostar (379013) working on weekdays for the past five weeks have been deemed a success, and engineers from Bombardier and Network Rail will now assess the data collected.

Initial costs of building an IPEMU put the price of a brand new train at slightly more than a diesel multiple unit, but that lifetime costs would actually be lower than that of a DMU.

While a Class 379 was chosen, it is possible that other new-build EMUs could be retro-fitted with battery technology. Retractioned EMUs dating from the 1970s and 1980s could also be used, and Bombardier told RAIL that a feasibility study into fitting battery technology to a Class 317 has been carried out.

When the ‘379’ finishes its testing, it will return to Derby Litchurch Lane, and the batteries will be removed. This will take three weeks, after which 379013 will return to the West Anglia route to Cambridge and Stansted Airport.