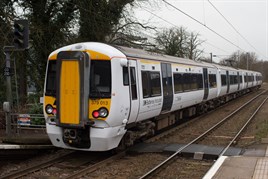 A battery-powered Class 379 Electrostar carried passengers on the Manningtree-Harwich Town branch for the first time on January 12.

NR Principal Engineer James Ambrose said: “After months of engineering and testing, the train is running just as we would like it. We’ll be using this period to gather data on how it handles during passenger service – most travellers will recognise how quiet and smooth the ride is compared to a diesel-powered train.”

The Independently Powered Electric Multiple Unit (IPEMU) will run for five weeks on the branch, starting from January 12. This follows a week of testing on the line that began on January 5. It will remain in use until February 13.

It is fitted with six battery rafts, and uses Lithium Iron Magnesium Phosphate battery technology. The IPEMU can hold a charge for 60 miles and requires two hours of charging for every hour running. The batteries charge from the overhead wires when the pantograph is raised, and from regenerative braking.