Javelin visits Hastings and Eastbourne for the first time 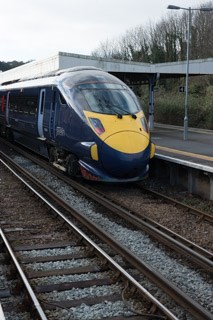 A Class 395 Javelin has visited Hastings and Eastbourne for the first time, in support of a campaign for better rail services in the area.

Southeastern 395014, which carries poppy branding in support of the Royal British Legion, arrived at the Sussex station on January 30, and later transported a party of invited guests to Eastbourne before returning later.

The visit was in aid of local efforts to improve rail services to the town, and immediately followed a rail summit attended by Rail Minister Claire Perry, local politicians and Network Rail representatives.

A proposal has been made to extend High Speed 1 services to Hastings and Bexhill-on-Sea, although there is currently no firm commitment or funding from NR to do so.