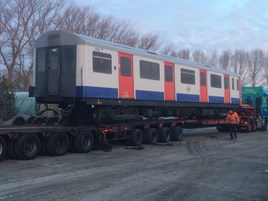 The first D78 London Underground D-Stock train to be withdrawn from service has arrived at Vivarail’s Long Marston base, ready for conversion to a D-train.

The vehicles were transported to the site by road, which Vivarail Chairman Adrian Shooter told RAIL was “a lot simpler and cheaper than hauling them by rail”.

Three of the four vehicles delivered are being weighed and checked carefully before work begins on stripping them down. Said Shooter: “They will then have all the old electrical equipment under the floor removed as we prepare to start building them up.”

The fourth vehicle is due to arrive at a studio at Leamington Spa imminently. There, Vivarail’s partner Creactive will fit it out with “several different types of seating and other features so that potential buyers can bring passengers along to express an opinion”. Creactive owner Neil Bates is a director of Vivarail.