TPE to introduce interim ‘68s’ and Mk 3s in July 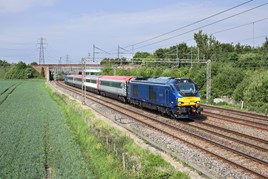 The planned use of Class 68s and Mk 3s by TransPennine Express has been delayed, and will now start in July rather than May.

The initial plan was that they would be used for nine days from May 21 until the start of the Liverpool Lime Street blockade.

It had been intended that two pairs of top-and-tailed ‘68s’ would haul Mk 3s leased from Porterbrook. However, that has been delayed because the stock is not yet ready. Also, not enough staff were trained in time.

TPE plans to use the ‘68’-hauled sets for training purposes, ahead of the introduction of the Mk 5A locomotive-hauled sets from the autumn. They will also be used to boost capacity across the Pennines, and reduce the number of trains formed of three-car Class 185 diesel multiple units.