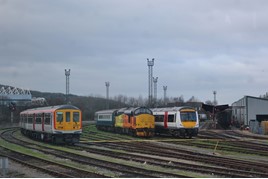 Class 769 FLEX bi-mode trains could finally make their Transport for Wales passenger debut this spring, prior to the May timetable change.

The four-car trains, converted from Class 319 electric multiple units, were ordered by the Welsh Government in 2017 with the aim of entering traffic in May 2018. Initially five were ordered from Porterbrook, with a further four added to the deal.

However, so far none has been used in passenger traffic, with all three FLEX projects delayed (Northern has yet to put any of its eight into service, while Great Western Railway has yet to receive any of 19 tri-modes).

TfW spokesman Lewis Brencher told RAIL: “The first Class 769 unit is now at TfW’s Canton depot. Proving runs and crew training will commence over the next few weeks, and we’re currently planning to introduce the first of the ‘769s’ into service on the Rhymney Line during the spring, ahead of the May timetable change."

Welsh First Minister Mark Drakeford told the Welsh Assembly Government last November in a Written Reply that “Porterbrook has been set repeated targets for the Class 769 trains, which have all been missed. TfW is working with Porterbrook to ensure the Class 769s enter service as soon as possible in 2020 and will displace Pacers as they enter service."