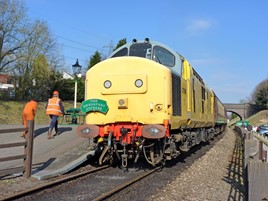 Network Rail has confirmed that 37198 will be used as a spares donor for the overhaul of its Class 97 fleet.

There had been speculation that the locomotive was to be stripped and scrapped once it moved to Derby, but NR says that will not be the case.

An NR spokesman told RAIL on January 26: “It’s now being used as overhaul cover for three Class 97s which operate in the Cambrians area. When one of the Class 97s comes in to be overhauled, the parts from 37198 will be used.”

NR added: “It may well be sold or leased after the parts have been borrowed for the service exchange. However, this hasn’t been decided yet, as the overhauls will last at least two years.”

The locomotive had been repaired by Nemesis under contract as part of an insurance scheme, with NR not having to pay additional costs.

It is not fitted with safety systems that would enable its operation on the main line.