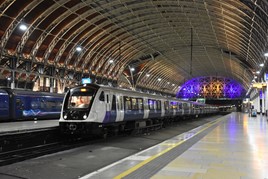 Production of the initial order of 65 Class 345s for Crossrail is progressing, Bombardier told RAIL on February 28.

The manufacturer said that of the initial order of 65 trains for Crossrail, 35 had been completed, with more in production.

While Transport for London (TfL) publicly states that the deal is for 66 trains, Bombardier has only received an order so far for 65, although it is expected that will increase to at least 66 and probably 70. Last year, TfL extended the deal by another four trains.

Tanner said that the first two full-length nine-car electric multiple units had been delivered, with 345020 being used for testing between London Paddington and Maidenhead (RAIL 847), and 345021 being used to test Communications Based Train Control (CBTC) on the central section.

Meanwhile, there are currently 13 seven-car Class 345s at Ilford for passenger duties, with 345005-017 available. Bombardier spokesman Will Tanner told RAIL that 345013 was accepted for service on February 28. Tanner said a further two seven-car sets are due by the end of March.