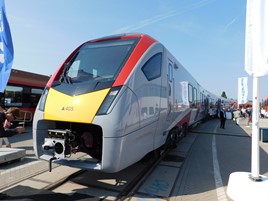 The first Greater Anglia Class 755 will arrive in the UK towards the end of this month, with the first train entering traffic in mid-May.

The schedule was revealed by Thomas Ahlburg, group chief executive of Stadler, during the train’s launch at the InnoTrans trade show in Berlin on September 20.

“We are bringing InterCity-class trains on regional routes,” he said. “We have a history of cascades and hand-me-down stock, and this will shoot us up to the top of quality.”