May 2018 start for ScotRail HST fleet 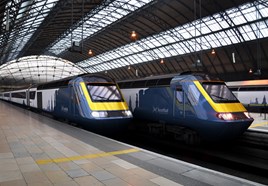 The first refurbished ScotRail High Speed Trains will enter passenger traffic on the Edinburgh Waverley-Aberdeen route from May 2018.

Chris Tait, ScotRail’s New Trains Project Manager - HST Fleet, told RAIL that the first refurbished rake of Mk 3s will move to SR in February, for training ahead of the introduction. He said that the first nine HSTs to enter traffic with SR would be four-coach sets, followed by 17 five-coach sets.

Currently 43021 and 43132 are with SR for driver training, which starts in earnest from September 18. The week before they were used to train senior drivers who would then train the other crews.