Main line testing of new TPE Mk 5As under way 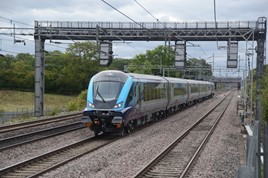 Testing of TransPennine Express Mk 5A coaches has begun on the national network.

The first rake to travel on the main line was TPE02, which ran from Manchester International depot (where the sets are based) to Rugby on August 28. The test was supposed to run to Bletchley, but late running of the train forced it to return early. The next day, TPE02 ran to Carlisle.

Power was provided by 68020 Reliance, and the coaches were Trailer First (TF) 11802, Trailer Standards (TS) 12704-12706 and Driving Trailer Standard (DTS) 12802. This was the first of the four rakes currently in the UK to have been delivered by manufacturer CAF.

These initial runs are to ‘bed in’ the coaches prior to completion of final type testing. The majority of the type testing has been carried out at Velim (Czech Republic), where TPE01 was tested for several months (RAIL 851).

Prior to the coaches entering traffic, TPE will be working with CAF (which built the coaches) and Freightliner Heavy Haul (which is contracted to drive the test trains) to complete verification checks at locations where the ‘68/Mk 5A’ sets will call. These checks including stopping positions, wheelchair deployment, and confirming Automatic Selective Door Operation (ASDO) plans.

Training of TPE drivers on the Class 68s has begun, and the operator told RAIL that on-board staff training will follow once type testing is complete.