Greater Anglia to stop using Class 37s from this weekend 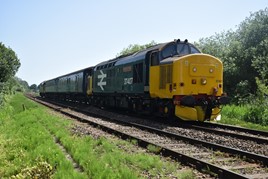 Class 37-hauled passenger trains in East Anglia are due to finish on September 21.

The Class 37s replaced ‘47s’ that were supposed to have been used on an ad hoc basis, but had in fact been used regularly since June 2011. The ‘37s’ replaced the ‘47s’ when DRS disposed of the latter.

GA used the ‘37s’ on trains between Norwich, Great Yarmouth and Lowestoft initially on weekdays, before also working on Saturdays.